Alive on the Edge is a unique autobiography in the Christian world. Unlike many Christian autobiographies where the person had a bad and evil life, then got saved, and turned their lives around, learning to live and trust the Lord through His Son, Jesus Christ, Tom Baird, the author of this book, got saved at an early age and received the Gift of the Holy Spirit in his early teenage years. These experiences served as a foundation for Tom as he moved forward in his life.

As Tom grew up, he left home to enroll at Michigan State University (MSU) where he would study and major in Agricultural Education. During that time, he also started participating in ROTC (Reserve Officer Training Corps) activities at the school in preparation for being commissioned an officer in the United States Army. Also, while he was in college, he met and married the woman of his dreams using "study dates."

Tom would graduate from MSU, be commissioned as a Second Lieutenant in the Army, and head for West Germany, where he would serve and learn from soldiers who served with Generals Eisenhower, Bradley, and Patton in the dismantling of Nazi Germany. After being promoted to First Lieutenant, Tom would get his first command. Just about the time he was getting accustomed to being a commander of troops, he was promoted to Captain. A week later, he received orders to be a Military Advisor to the Army of the Republic of Vietnam (ARVN).

Vietnam and the Mekong River Delta 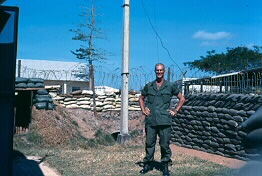 After resettling his family in Lansing, Michigan, Tom traveled to South Vietnam where he was assigned to the Cau Ke District in the Mekong River Delta. When he arrived at his compound, his unit was already in the midst of a firefight. Suddenly, warfare was not something he practiced, but hoped he would never have to do. He was guiding real troops into real battles with real enemies. Even worse, this war was being conducted in the Vietnamese language. For the next six months, Tom would experience the horrors of war that most people never see. Alive on the Edge tells the war stories from the perspective of an American Military Advisor.

Later on, Tom would be assigned to work in Cau Nang District and Tra Vinh Provincial Headquarters. This command gave him more responsibilities, but gave him more satisfaction. He still had to go out on missions to various outposts, but he also planned missions and came up with new methods to outwit all the enemy spies who had infiltrated his post. Using a new overlay system, they could hide their real missions while giving their enemies false missions to occupy their time.

Tom's successes would not be lost on other commanders in the region. Click here to read the sample chapter on The Cambodian Intervention, taken straight from the book.

Tom would spend a year in South Vietnam before he was able to go home and be with his wife and young child. After a short time home, it was time for him to return to Vietnam for a second tour. Click here to go to the next section.